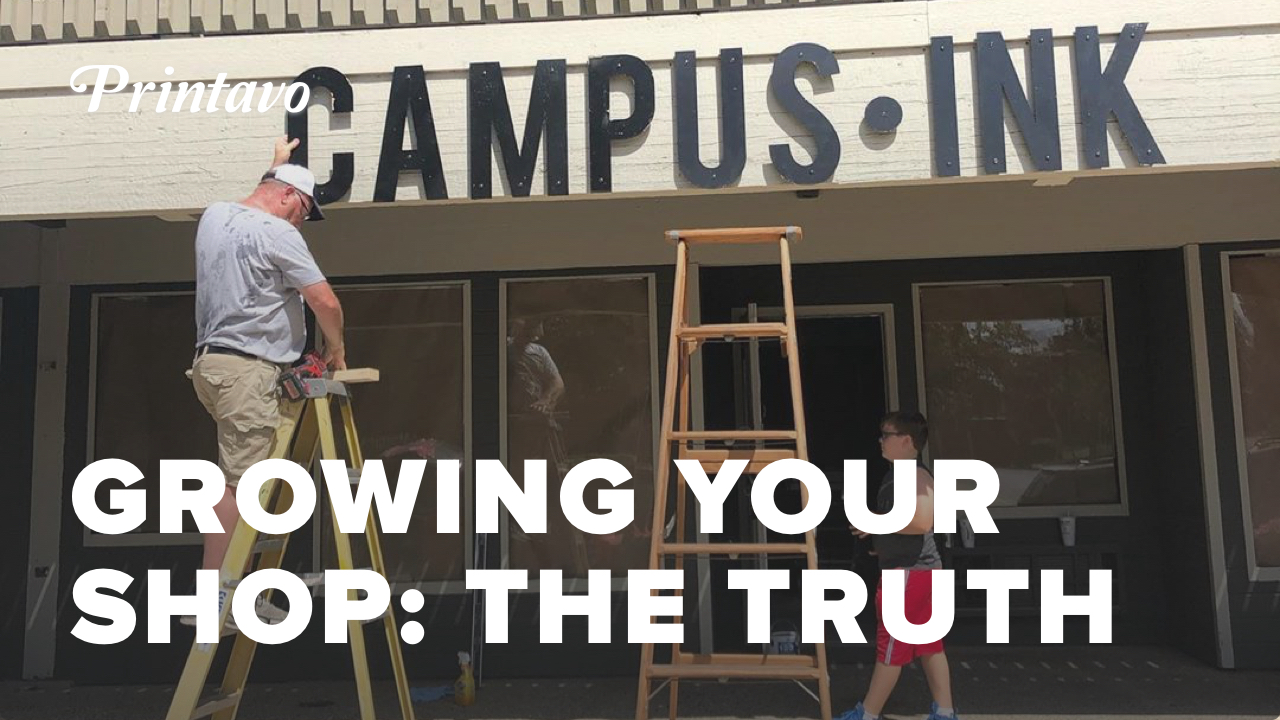 On the latest episode of Printavo's PrintHustlers Podcast, I sat down with Steven Farag to discuss how growing his screen printing business 400% has led to a lot of new and interesting challenges.

If you've followed us at Printavo for a while, you know that we're growing rapidly. Like Steven at Campus Ink, I face a lot of difficult challenges and decisions. Choosing what to do every day – and deciding if it's the right thing to spend my time on – is an ongoing challenge.

We talk through Steven's latest equipment purchases (including why he chose Douthitt's CTS system), how he's approaching growth, why he's spending $1,000 a month on an accountant, and how he plans to take "jobs" in his shop and turn them into careers.

We're both so impressed by Traction by Gino Wickman that we can't recommend it enough. I've even hired a Traction professional to come speak at Printavo's PrintHustlers Conf 2020 – it's just too valuable not to share.

Steven has invested thousands of dollars into Campus Ink's screen room this year. His goal is to automate every part of their screen making and imaging process – which requires a glut of high-tech screen printing equipment:

But why spend thousands on technology if your business is doing well?

Steven points out that Campus Ink reached a point where it was obvious they had to invest in their screen printing production capabilities. "We have the sales to feed it, we're subbing out lots of work, and the screen room is the final piece of the automation puzzle so we can go from online stores straight to the press," Steven said.

"Jaws dropped in the shop when they saw how easy it was [to use the new Douthitt CTS machine to burn screens]," Steven noted. "We made 60 screens in an afternoon on a whim. It was a cool feeling for all of us. Like a breath of fresh air in the shop."

Why should you invest in your screen room? Steven points out these benefits:

Steven's setup times have dropped significantly. "We went from 45 minutes to 10 minutes to setup a job, and now 4 different people can do the whole process: coat and burn and expose." Good prints start with good screens, after all.

Leading as an innovator (and who you need to help you)

"The perfect employee will not fall out of the sky. We have to create superstars. Screen print shops have to hire key long-term employees in production, marketing, and sales." - Steven Farag

One of the most engaging presentations from PrintHustlers Conf 2019 was Ryan Moor, from Ryonet, discussing what it took to grow Ryonet and screenprinting.com to its current scale. You can watch his presentation here, but the main takeaway is simple:

There are two types of people in any business. Integrators and innovators.

The first are integrators. Integrators tend to figure out how to do things. They build systems, create repeatable tasks, and are super comfortable figuring out how exactly to accomplish something.

The second are innovators. Innovators tend to figure out what to accomplish. They build goals, create visions and values, and are super comfortable thinking about what the business can achieve.

Ryan is an innovator. He hired integrators to take on the nuts-and-bolts execution of his vision, and Ryonet has enjoyed tremendous success because of that change.

"I have to be an innovator," Steven pointed out, "Because if I'm doing the same thing in my business in 5 years, I'm actually moving backwards." This means setting out the values for Campus Ink's staff and giving them a vision to adhere to every day.

There's more to it than just determining your vision, though. You have to know what you don't want, as well. Steven points out that part of the work he's doing is to define what Campus Ink isn't! "I don't want 4 automatic presses. I don't want to just make more revenue."

Instead, he's identified the major thing he already loves about Campus Ink: "I love to teach students design. That's what we do. That's a core value. So let's create a learning program to teach design!" That single goal streamlines the decisions Steven makes as he works toward his long-term goals.

Traction: what do you actually want your business to be?

"You'll read Traction and realize it's a real wake-up call. You simply don't have time to put things on paper during the day. The goal is taking the 5 or 6 things that are really valuable for you out of the book." - Steven Farag

We're huge fans of Gino Wickman's Traction at Printavo (which is why we've invited a Traction profession to speak at Printavo's PrintHustlers Conf 2020). It's such a helpful book that we believe every business owner interested in growing their business should read it.

Steven has really latched on to Traction as a way to scaffold his thinking about Campus Ink. I've done the same with Printavo!

Not every screen printer is interested in growing their business to be bigger. That's not always the right goal, anyway! We visited Calimucho in San Pedro, CA recently. Their niche is rock-solid. They're not trying to become the next Custom Ink. They don't have an interest in taking over the world.

But they don't need to. "Shops that have been in the game for a long time don't talk about profit and revenue," Steven noted, adding, "They talk about balance."

But if growth is on your mind, or it's happening faster than you can handle, Traction is a great resource. It breaks things down into 10, 5, and 3-year plans – and then further into 90-day action items. Steven looked at Campus Ink as a dual-sided business: there is production (manufacturing) and there is sales.

So, one of his first 90-day items was to invest in equipment! Boom, done.

Sales
Campus Ink hires student designers and salespeople to speak directly to college students and organizations. Steven has discovered that to scale and grow this model, he'll need to take action on:

It's obvious to see why Traction grants a business owner so much clarity. It defines your problems in terms of your goals, allowing you to approach goals through smaller, discrete tasks. Simply put, Traction is a way to force yourself to be both innovator and integrator in equal measures.

Note: I really recommend actually reading the Traction book versus getting an audiobook. You'll want to draw in it, read through passages multiple times, and constantly revisit it. It's got lots of great worksheets and exercises. Plus, I fell asleep listening to the audiobook.

Steven finally implemented the Profit First system in his shop.

If you're not familiar with Profit First, you should watch Mike Michalowicz give his stunning and hilarious 90-minute presentation at Printavo's PrintHustlers Conf 2019: click here.

"Revenue and profit are deceptive," Steven said. "You see shops making lots of revenue, but they might sell lots of expensive products at a very low margin. Or you see contract shops that don't have tons of revenue, but they make money hand-over-fist because they're set up to be so efficient." So, your top-line revenue isn't everything!

Steven is putting his money where his mouth is, too. He's paying a Profit First accountant about $1,000 a month to help automate profits into the structure of his banking. "I was scared to pay that much," Steven lamented, "But then I thought...what if it works?"

The truth is that we all need a little help to be our best selves. Steven hired an accountant to make Profit First a reality because he needed that extra dose of motivation from an outside source. "It's like having a personal trainer," he pointed out. "Small business owners don't reach out to coaches enough. They need people to help them be accountable. Shops that actually do it love it."

For Steven, it's simple: "We have to build some wealth in the business so we can make the strategic moves necessary to get us where we want to be."

Retention: make it a career, not a job

"Taking jobs and turning them into careers is going to be my biggest challenge." - Steven Farag

For most employees at screen print shops, screen printing isn't a career. It's just a job. Screen printing has a notoriously high turnover rate, and lots of businesses struggle with growth because they can't find good screen printers to hire.

Campus Ink always has a supply of students, but they don't necessarily stay in the business for the long haul. "Retaining people is a big issue," Steven said. "Some shops like Printed Threads have people that stay with them for 10 years." What did it take for Printed Threads to get employees to stick around? "I talked to Brett (Printed Threads' owner), and he said it came down to training, growing, and progressing with them," Steven mentioned.

There's been a generational shift away from long-term jobs. "My mom worked at one bank for 25 years," Steven pointed out. People tend to job hop to get better salaries and benefits. They're not loyal to their employer. Part of that has to do with expectations – employers aren't particularly loyal to many employees, unfortunately.

"How do I let the people that trust me just a little bit grow that trust into a career?" Steven asked. "This is a job to them. They're not owners. They don't want to be up all night."

Retention is going to be an ongoing theme for screen printing businesses throughout 2020. With wages and expectations rising, employers have to think seriously about how they can retain great staff. One strategy is less complicated and painful than you might think, and one both Steven and I have encouraged every business owner to work on: their values.

Look at Shirt Kong, Superior Ink, and Printed Threads. Every employee there gets it. "I talked to a guy that owned a company who started his career at Disney. Disney has their values posted everywhere. Everyone knows it. He did the same thing," Steven said. It may seem almost cheesy – but you really have to hammer home your values over and over. Post them around your shop. Talk about them. Share them. They are the foundation for every relationship you have with each employee!

A career is a relationship. It's not an accident, and it's not just a job. It requires two participants. Play the long game if you want to retain your staff.

Enjoyed this? Read my most recent article on 4 simple steps to hire great screen printers. 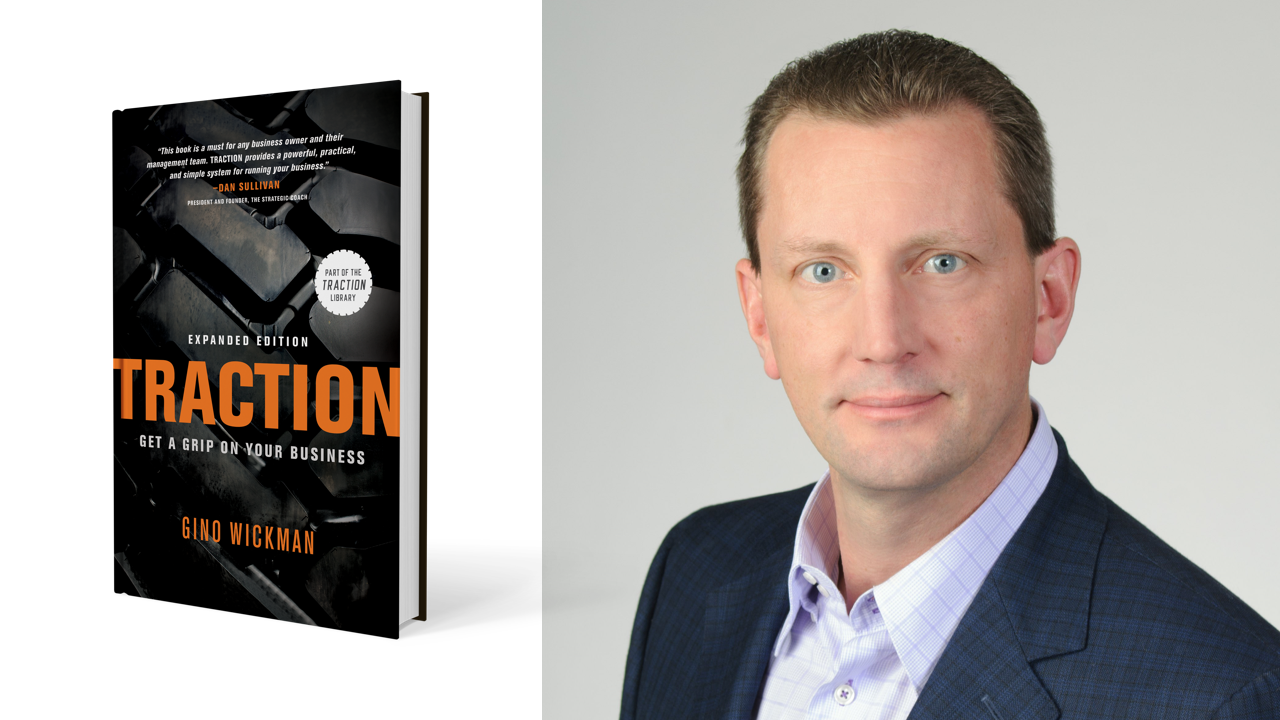 We're bringing Traction to Printavo's PrintHustlers Conf 2020 in July! Join Tom Bouwer, a leading Traction professional, at our annual conference for screen printers. Get your tickets now before prices increase on April 1st.

If you want to meet the industry’s biggest players, learn from the best, and have a blast at an incredible venue with amazing people, then Printavo’s 2020 PrintHustlers Conf is the place to be.

Where: Ace Hotel in Chicago
When: July 24-25, just after the ASI Chicago show.
What: A gathering of the industry’s finest for candid discussions and solution building (and some fun, too)

Thanks to our sponsors: Ryonet, ROQ, Allmade, Jerzees, Easiway, and Supacolor.

Next Post: The Life of a Female Screen Printer? Impressions Expo 2020: Alexa from In-House Prints Interviewed