From Manual to Automatic Screen Printing, All in a Shipping Container: Success Print Shop® 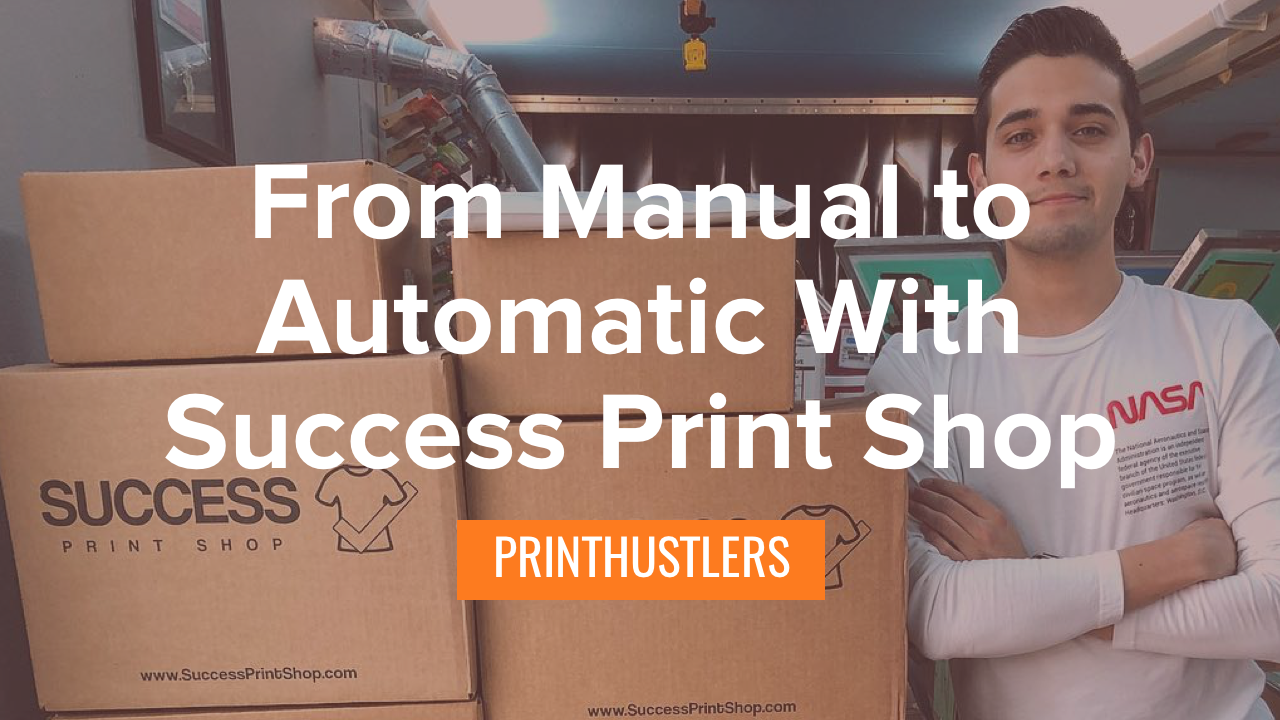 Smack in the middle of Texas is San Angelo, a bustling community with 100,000 people that's hundreds of miles from the nearest big city. On a 16 acre homestead in a metal shipping container, Success Print Shop's Jonathan Ornelas has build something special from scratch: a customer-focused print shop with a crew of exactly one.

With a thriving, outgoing, and positive mindset, Success Print Shop embodies the new generation of print shops. We're not the first ones to point this out, either.

You're 20 years old. You're busting your butt in college working on your accounting degree. Your sister is making money on Etsy, but you're stuck working retail, and she tells you that you really need to start printing t-shirts. "There's so many people that just sell cool t-shirts on Etsy. We have to try it!"

You stumble onto Ryonet's YouTube channel. Ryan makes it look so easy. Why not give this a shot? You order the basic starter screen printing kit. You've already sold a ton of your awesome Breaking Bad inspired shirts. Then the questions begin.

Push? Pull? How does this emulsion work? Who has a printer that can make my films? How do I know I cured this ink? How the heck do I get these screens registered? You're on the hook for dozens of shirts you just sold on Etsy. Time to figure this screen printing thing out!

6 years later, Success Print Shop is a thriving brand. It's just Jonathan and his ambitious customer-first outlook. He's put his goal right in the name of his shop: Success. There have been real challenges, and growth is not a low-effort endeavor. Jonathan has risen to the occasion and created one of the most unique and enjoyable brands in the custom apparel industry.

He loves his business and isn't afraid to take massive action to get the job done. He's not afraid to take the long route to get where he's going – and has shown real grit in his relentless pursuit of success.

A print shop...in a shipping container?

Jonathan started printing in his bedroom at his parents' house. He broke into the market by selling Breaking Bad shirts on Etsy – which sold well enough to pay for the starter screen printing kit he'd purchased.

"I moved everything out of my room and slept on the couch for 4 years." Once his family decided to relocate to a rural homestead on 16 acres, Jonathan started looking for a solution. He found one in a 40' shipping container. Built with this father, Jonathan values the memories he made while figuring out to wire, insulate, and organize his new workspace.

Jonathan's scrappy, hard-working nature let him print thousands of t-shirts by hand in the shipping container. But at a certain point, he simply couldn't execute the jobs that would grow his screen printing business. He started on the Riley Hopkins 1 station, 4 color press that Ryonet sells. "I still can't believe I printed that long with that press. I would just wreck my body printing."

There are real advantages to being small. Jonathan can text with every customer. He can bag-and-tag every order. He can take great pains to get artwork and screens dialed in perfectly. But no matter how much enthusiasm and grit you have, there are physical limits to how fast and how much you can screen print by hand!

In 2018, the need for an automatic press became more and more apparent. The shipping container wasn't large enough anymore.

Jonathan attached a small metal building to the back of the shipping container. This gave him the space he needed to house his new M&R automatic press. We're wagering you won't find too many custom apparel printing shops hidden in shipping containers in rural Texas!

In 2018 at 26 years old, Jonathan knew it was time to get an automatic screen printing press. It had been a long-time dream, but it became a necessity: "I was spinning my wheels. Pulling all nighters, working too hard. Leaving money on the table." In September, he got a 600 piece order for front and back prints with multiple colors. This is the kind of job a manual printer has to turn down – but it became a pivotal turning point for Success Print Shop.

He reached out to a shop in San Antonio, drove 4 hours to print the job, and used the shop's automatic press to learn what it's like to use an auto. He was hooked.

What an automatic screen printing press let him do: For the 600 piece job he printed in San Antonio, it only took a few hours from start to finish. If Jonathan had tried to print the t-shirts manually, he estimates it would have easily taken 12+ hours since it was a front-and-back design – and he would be completely burnt out at the end of the job.

"I printed 500 piece jobs that would take a week, and I'd be exhausted at the end. That same job is just a few hours on the automatic."

How much it costs: Jonathan bought an M&R Sportsman 8 Color 10 Station automatic screen printing machine. He estimates it costs about $1,300 per month. He went with M&R because of their financing.

"I know $1,300 isn't much to a big shop. But for a shop just going from manual to auto, it's a huge commitment. It becomes a real business, with real overhead, and real risk. I think about my customers all of the time. If I get bad reviews or don't make sales, that's a risk."

How long it took: It took a little less than 3 months from the time he ordered the automatic press to the time it was installed. This was because of things on his end – building an entirely new building, for instance. The actual installation took a couple of days, and Jonathan had to pursue training for how to properly use his new M&R press as well.

"It took me a weekend or so to learn how to operate it. Printing isn't tricky, it's just learning to operate the automatic press. Spend some time just playing with the machine."

Why he did it: Faster turnaround, higher production capacity, and out of necessity to keep his business growing.

"I'm surprised I never got hurt. I knew I couldn't keep pushing that squeegee. At that point, it's a no-brainer to go automatic."

What it's let him do: For the 600 piece job he printed in San Antonio, it only took a few hours from start to finish. Those hours that used to be spent with a squeegee can be spent making more sales and investing his time in improving the business – he's working on the business as much as he's working in the business now.

"With the manual screen printing press, I couldn't take big jobs. I know it all comes down to sales. The sales became bittersweet. Ok, I got the sale – but now I have to go murder my body. Now there's nothing holding me back from making those sales."

Elements of success: combining the right values with charming details

Jonathan didn't show up one day and find a successful brand waiting for him. He had to develop values and a vision for his print shop. Luckily, his background in accounting and a supportive family helped him leverage his business values.

What does Success Print Shop build its business on? Jonathan would probably say "coffee," but he's thinking about the right approach to custom apparel printing.

There's a secret weapon that's kept Jonathan's head down during the last few years. He's got a deep affinity for artwork. "From the get-go, I've always loved artwork. It's a big deal. It takes so long. But it's my favorite, and I don't want to get rid of that," he says.

The value of education (and accounting). Jonathan finished his college degree despite having a lucrative opportunity to start a business. He kept printing while he was in college as a side gig, but pursued an accounting degree. Accounting isn't his first love, but he does enjoy doing the books – and he doesn't have to pay someone else to do his taxes for him. This foundation based on a strong education has helped him succeed in business and take the long-term outlook instead of looking for a quick buck.

Love your customers, and mean it. A people person, Jonathan cherishes printing for his customers. The intersection of artwork, rational business thinking, and making his customers happy has kept Jonathan grounded throughout the last few years. The value that his custom printed apparel adds for local universities, fraternities and sororities, franchises (like Chick-fil-A), sports teams, events, and a plethora of other great customers has kept him motivated. 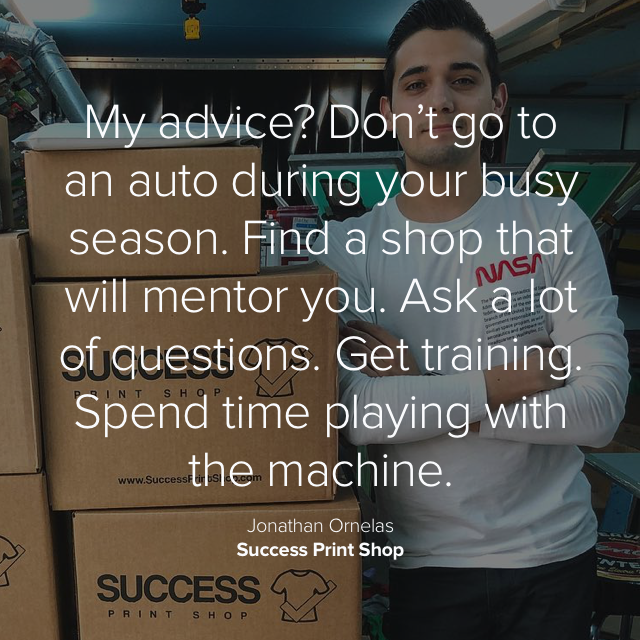 Jonathan has followed along with the Print Hustlers blog for years. Coincidentally, Printavo started the same year that Jonathan started his business.

He had some advice to offer for shops that are looking to go from manual to automatic screen printing:

Once the monthly payments for your new automatic press kick in, it's time to start supercharging your sales efforts. The new press has allowed Success Print Shop to confidently take on challenging jobs and expand their customer base. There might even be the first full-fledged employee coming into the mix at Success Print Shop!

So what does a true Print Hustler like Jonathan Ornelas use to fuel his ambitions and keep pushing through the ups and downs of owning a business? He's a big believer in feeding yourself optimistic, positive, powerful content that helps you rise to the occasion. Put good stuff in, and good stuff comes out. 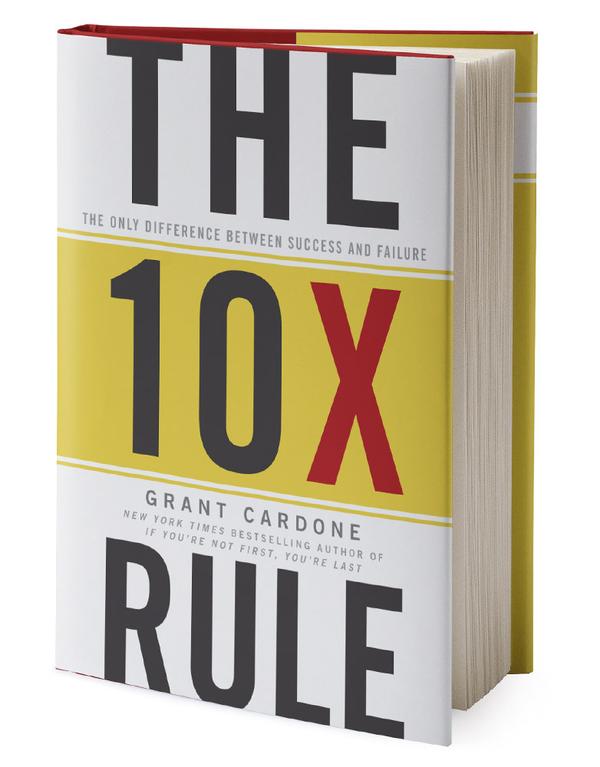 His favorite book? Grant Cardone's The 10x Rule. It gets him pumped. Grant Cardone's core advice is to take "massive action." The gist: if you want the success, you'll have to take much more action than you would for mediocrity. These words ring so true for Jonathan that he's put them in his workspace (also featured: Jonathan's true love – coffee). 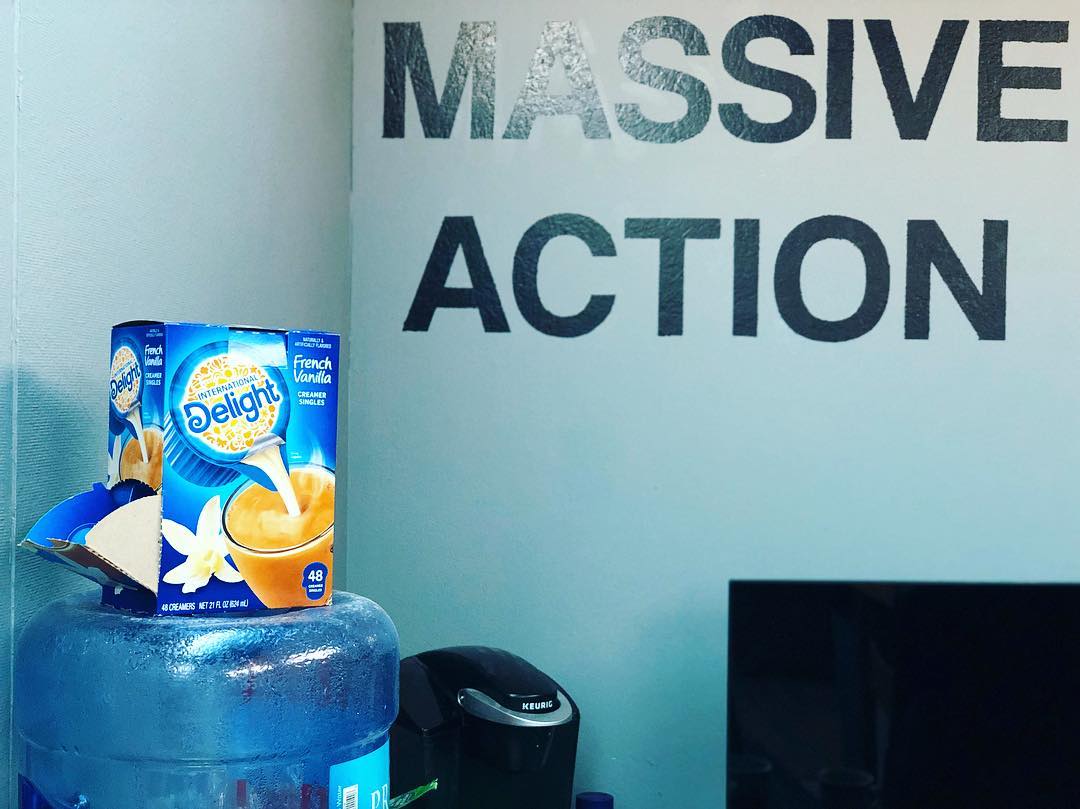 We can't wait to check back in with Success Print Shop and see what develops. It's no exaggeration to say that Jonathan has huge goals – but he also has the sheer energy and ambition to take massive action toward those goals.

Success Print Shop is a story of hard work – and knowing when and where to apply effort for maximum results. Purchasing an automatic screen printing press is just one stop along the way.

We're constantly talking to shop owners about the trials and tribulations they face. Check out some of our recent interviews, chock full of insights straight from the people who know best.

Be sure to follow Success Print Shop on Instagram to see what Jonathan's up to. It's going to be a fascinating journey, and we're ready to keep pushing with him!