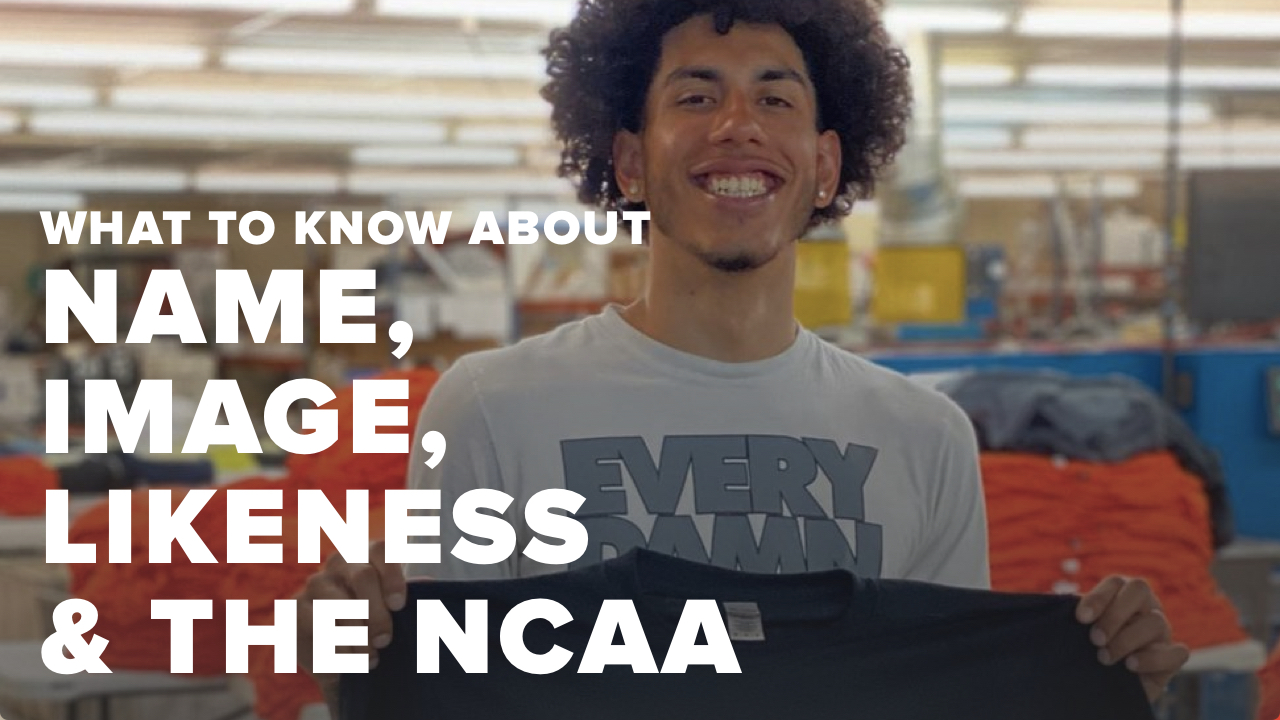 “I told you the most I’ve told anybody!”

There's been a lot of speculation about what this change means, and some of the experts say this is the biggest change to college sports since the creation of the NCAA.

I expected everyone in the print community to want to jump onto the name-image-likeness (NIL) bandwagon and immediately try to flood the zone with NIL gear, but when I polled Print Hustlers I got a really tepid response.

On Facebook, most of the responses were “wait-and-see” comments. On Instagram, there was a clear 50/50 split: 50% were ready to go, but the other 50% really didn’t seem that interested.

I shouldn’t be surprised about the reception to NIL deals.

These are big audiences. Enough to account for $900M in television revenue. But if you don’t like college sports, you probably won’t ask young athletes to partner with your business.

Shops are also timid about NIL deals because of operational challenges. Fulfillment and customer service are not easy tasks. There are ongoing shortages that make running stores riskier than it used to be from a cash flow perspective.

And managing the personalities and whims of young athletes takes patience and persistence that might not be worth the effort. 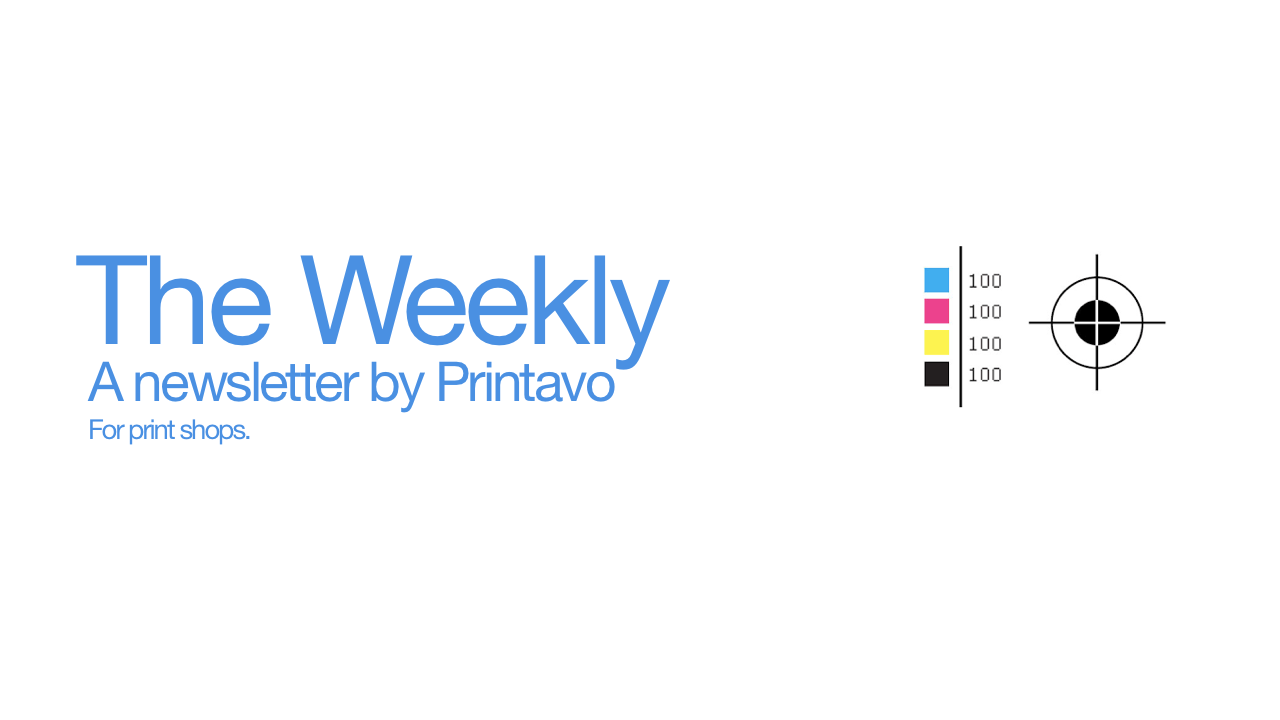 This is an excerpt from The Weekly, Printavo's newsletter. It's the easiest way to get educated in the print industry without paying a dime, delivered to your inbox.

Luke Gardner: So let’s start. What’s up with name-image-likeness deals? What should people know right off the bat?

Steven Farag: Illinois honestly did a good job putting out a lot of content for guidelines around name-image-likeness (NIL). In its simplest form, NIL is building a brand for an influencer. If shops already do work with influencers and run Merch stores for them, this is all going to be very similar. That’s the basics.

There are rules you have to follow, and they’re based on which state you’re in. But now, typically, you can’t use the university’s likeness in congruence with the individual.

It can’t say “Illinois” at all, for example. We are building a brand around their slogans, sayings, and things that personalize them...but not necessarily related back to the university.

Luke: First off: why do this? What’s the advantage? What made it a good fit? Why isn’t every shop running out and doing this yet?

Steven: For us, basically, the proximity is there. It is in our space, we’re in a college town. We’re already set up to run and fulfill Merch stores. You could argue that e-commerce is up to half of our business already.

To activate an influencer that’s an athlete is fundamentally no different than starting a Merch store for a parent-teacher organization, for example. For the PTO, we come up with their brand, what they do, and what they say, then run the store for them.

I think the reason every shop isn’t doing it is because the shop winds up representing the influencer’s brand. We are held to a very high standard by our customers and the influencers. We do customer service, we handle the turnaround time, we deal with returns and complaints and exchanges.

The last thing we want is fans going to the influencer and complaining.

Luke: Have you seen fans complain to the influencer before?

Steven: No, we haven’t, because we bake it [customer service] in. We tell them: we’re going to be your Amazon. Customer service is just such a big part of it. If customers have questions, they send them to us and we handle it. So it’s worry-free for the influencer. The last thing they want to do is deal with that stuff.

Luke: How long has this been on the radar at Campus Ink?

Steven: I’d been watching it for the past 4 months or so. Because we did the Illini store, we talk to the athletes all the time. When we do March Madness we have to be really careful not to use NIL. We are licensed Illinois vendors. But there’s peaceful co-existence.

[The universities] want athletes to be successful, they want to continue to sell their own merchandise, and they’re looking forward to a situation where, hopefully, at a certain point there’s name-image-likeness attached to the university.

It’s a sticky situation right now. And actually, this exact reason [a NIL dispute] is why the NCAA Football video game wasn’t made after 2013.

Luke: How do you choose who to partner with?

Steven: We just look at it as they come onto our radar. We’re not actively marketing to athletes yet, but we do have a dozen or so name-image-likeness athletes that we’re working with. It has to be a good fit for both of us, a mutually beneficial relationship.

We’re not going to put a huge investment into an influencer we don’t think will do well. That’s going to be a disappointment for everyone. For example, we’re going to look to someone that’s fairly successful and established. It can’t be an outgoing senior, or a new freshman. You want someone proven. There’s probably a bit of a sweet spot.

Steven: Everything is a trial run.

Everyone that we’ve launched, we’ve actually done well. Some have done better than others, of course. Some we had to push a little harder.

A lot of it is on the co-marketing and pushing by the athlete. But you have to be defensive here. For example, we won’t just build a store that’s open year-round. It’s always based on very limited quantities.

For our star athlete, it was limited to 200 pieces. Everything we do is going to be very limited. It’s designed to feel very exclusive and make the customer feel a special connection. That way, they are pieces that will not be created again.

Limited releases build their brand even better. I really don’t want to spray and pray. I want to be controlling about what we sell. By the way, we sold out of that 200 quantity run in less than 48 hours.

Luke: So you mentioned co-marketing is really important. Do you facilitate that?

Steven: We actually do create all the assets and resources. They just have to post them. We just realized early on that if they don’t have us to help, what good are we?

Luke: What didn’t you anticipate dealing with?

Steven: We have to be very careful about recruiting and partnerships.

They are high-profile athletes and students first, and there are a lot of individuals out there that might try to use NIL to recruit them and use them to raise money – kind of dirty recruiting – and I’ve already been approached by some unsavory characters.

It’s going to be a gray area. There’s not a lot of rules. There’s a flood of money coming in that was always held back, so where does it go?

Luke: One of the obvious challenges is art. How are you dealing with that?

Steven: We just have to Photoshop things out! We take out the school logo and just use the number. It’s more about something else though. You have to be honed in on building the brand on the individual [and look for other opportunities], almost like they don’t go to the school.

We do orders for their hometown, since these are often hometown heroes. For one, we did a replica jersey of his high school and he donated a bunch of the money to his high school.

Luke: Is NIL going to be limited to basketball and football?

Steven: Not at all. It can go to anyone with reach. Volleyball athletes can have great reach. It’s all about how much reach do they have.

If they have 33,000 followers, you can come up with something. One of the hard data points we look for is an audience.

The reason why it is so lucrative is that they’re literally handing you their audience.

Luke: So ultimately, how do you make this happen? Is this really about your shop pivoting to becoming a sort of boutique, on-demand marketing firm or…?

Steven: How do we do it? So for our simple partnerships, we build Printavo Merch stores. We do some other stores on Shopify. It actually doesn’t matter, because we have a Shopify-to-Printavo connection.

This was a natural pivot for us, thankfully. We have a program called “TMM,” for total merch management. We already run the stores and fulfillment for 9 national fraternities.

So we already have an incredible team that’s dedicated to creating this kind of stuff. They’ve done it before, so transitioning to a NIL deal was easy for our team.

Ultimately, look...you can’t skip on the other stuff, the “behind-the-scenes” of running online stores. You have to be really good at that to succeed here.